Introduction: we need data redundancy, but how, exactly?

You now have your distributed system in production, congratulations! Your cluster is starting at six machines, but it is expected to grow quickly as it is assigned more work. The cluster’s main application is stateful, and that’s a problem. What if you lose a local disk drive? Or a sysadmin runs rm -rf on the wrong directory? Or else the entire machine cannot reboot, due to a power failure or administrator error that destroys an entire virtual machine?

Today, your application is writing all of its critical data to the files in the local file system of each machine. Tomorrow, that data needs to be redundant. Sooner or later, your hardware will fail or an administrator will do something wrong.

How should you add the data redundancy that we know that you need? You ask for advice, and the answers you get are scattered all over the map of tech.

Each of those answers could make sense, depending on the application and your company and the company’s broader goals. This article explores how Wallaroo Labs chose a data redundancy technique that fits the needs of our product, Wallaroo.

Wallaroo is a framework designed to make it easier for developers to build and operate high-performance applications. It handles the complexity of building distributed data processing applications so all that you need to worry about is the domain logic.

When a machine in a distributed stream processor fails, there are two basic options for recovery:

Option 1 is what streaming systems based on Apache Spark and Kafka do: they store all the input event data, so they can resend the events after a component has rebooted.

Option 2 is what Wallaroo does. My colleague, John Mumm, recently wrote a blog article about Wallaroo’s checkpointing algorithm. That article explains Wallaroo’s recovery process when a worker can be restarted. However, that blog post doesn’t cover a different scenario: what happens if a Wallaroo worker’s data is lost?

When data is lost forever, by example

Let’s look at a concrete example: a Wallaroo cluster with six worker processes, each on a different computer (or virtual machine or container). 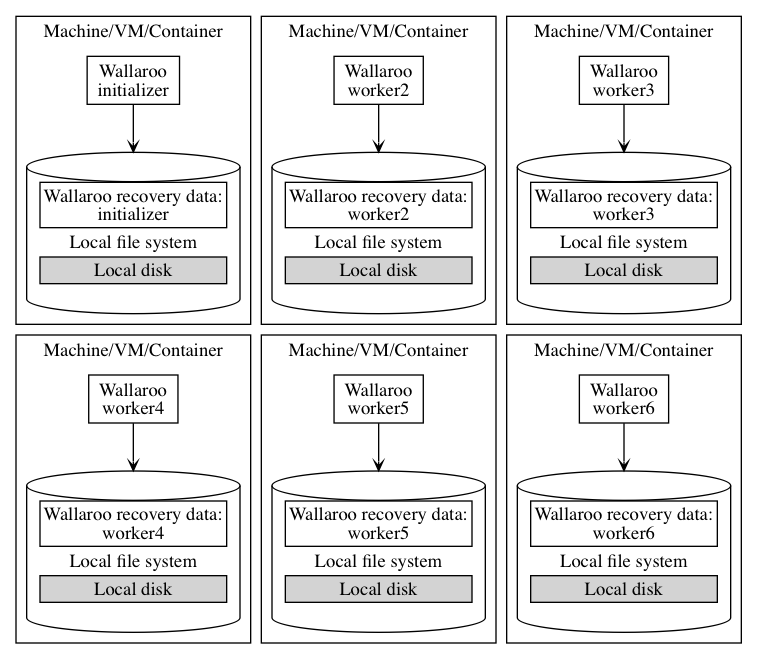 As an alternative, what if the same cluster were deployed in an Amazon Web Services (AWS) cluster using Elastic Block Store (EBS) volumes to create data redundancy? That’s what Figure 2 depicts. The same general principle applies to most file- block-device-centric schemes mentioned in the introduction, including NAS, SAN, iSCSI, and so on. 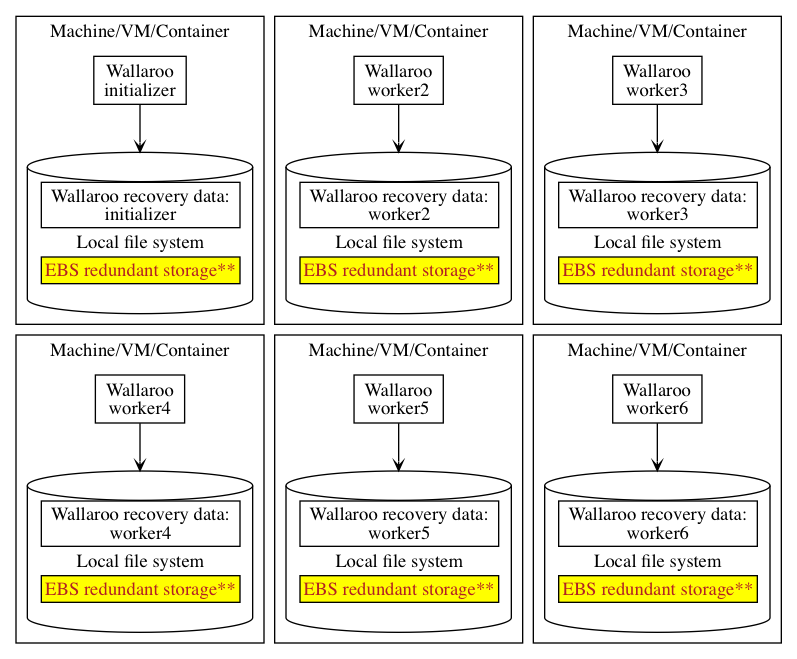 Let’s assume that worker5’s machine caught fire and its data is lost; see Figure 3. Also, let’s make the diagram a bit more accurate than Figure 2’s placement of the EBS service relative to the rest of the cluster. 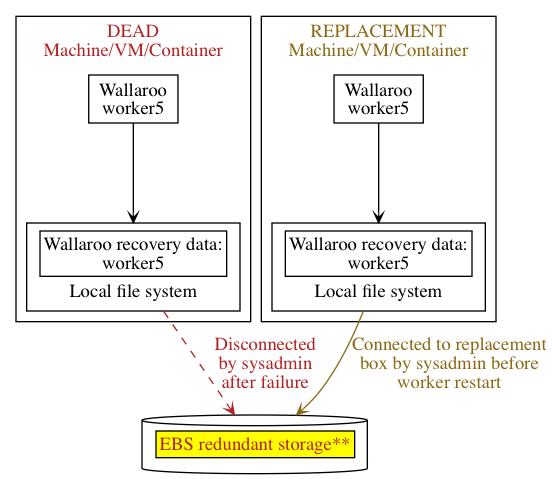 When the original machine/VM fails, the EBS volume is disconnected from the dead VM and attached to a replacement machine/VM. Then worker5 is restarted on that machine, and worker5 participates in Wallaroo’s internal snapshot recovery protocol to finish the recovery process.

At some point, your boss or perhaps you, will start adding some annoying restrictions to your app.

This is just a small sample of the deployment restrictions you might have to work with. Let’s look at the properties, restrictions, and priorities that Wallaroo Labs considered when creating a data redundancy strategy for Wallaroo.

Recovery data is infinitely sized and arrives at unpredictable times

Wallaroo has some properties that simplify choosing a redundant data storage scheme: a single producer and a single consumer.

General purpose databases and file systems usually support all kinds of shared read and write access to their data. If 700 clients want to read and write to the same database row or key or file, they will support it.

In contrast, every Wallaroo worker’s recovery data is not shared with other workers: it is private state, for use by a single worker only. A single worker process only runs on one machine at any given time. The worker’s recovery data is accessed in a single producer and single consumer manner. Industry and open source communities have many solutions for this kind of problem, including these types:

However, most of these techniques make assumptions about hardware and/or network services that are not available in all public cloud computing service providers or in private data centers. We do not want Wallaroo’s data redundancy management to steer us into a vendor lock-in problem.

Furthermore, most of Wallaroo worker’s data files are append-only. We very intentionally made this choice to make file replication easier. An append-only file’s data, once it’s written, is not modified by later writes. Once written, an append-only file’s contents are immutable. This immutability makes the task of replicating the file much, much easier. (For further reading, see Pat Helland’s excellent article with the punny name, Immutability Changes Everything.)

Reduce complexity as much as feasible

There are many open source systems today that can support Wallaroo’s recovery data storage requirements. Apache Kafka and Bookkeeper are two of the best-known ones. Wallaroo’s use case fits Kafka’s and Bookkeeper’s feature sets almost exactly. Why not use Kafka? Or Bookkeeper? Hadoop is another excellent fit for Wallaroo’s needs. Why not use Hadoop?

Alas, Kafka, Bookkeeper, and Hadoop are complex pieces of software in their own right. Wallaroo does not need most of their features. Let’s try to avoid requiring that Wallaroo administrators be familiar with details of running those services in development, testing, and production environments.

Kafka, Bookkeeper, and Hadoop have another complex dependency: the ZooKeeper consensus system. Nobody at Wallaroo Labs wishes to make ZooKeeper mandatory for development work or for production systems. Let’s try to avoid requiring that our customers use and maintain ZooKeeper.

Wallaroo Labs does not want to restrict Wallaroo deployments to a single cloud provider like Azure, Google Compute Engine, or Amazon Web Services. We could avoid lock-in by supporting many or all such cloud services. However, a company of our size doesn’t have the resources to quickly develop the code needed for supporting all major players in the cloud storage market.

Similarly, for traditional or on-premise data centers, we didn’t want to require the use of a NAS, SAN, or similar storage device.

RFC 959 defines the File Transfer Protocol (FTP). FTP services are old, well-tested, and are widely available. FTP, however, is not a perfect fit for Wallaroo’s use case because of the following conditions:

The last section listed three problems with the FTP protocol as defined by RFC 959. For each problem, a possible “tweak” was mentioned. That was not an accident. If the FTP protocol were tweaked in those three ways, then the result would fit Wallaroo’s needs exactly.

Rather than adapt the FTP protocol, we chose to create and implement a new file transfer protocol that is very similar to FTP but not quite FTP. Its name is DOS, the Dumb Object Service.

The DOS protocol is inspired by a small subset of FTP’s commands but without the ASCII-only nature of the FTP commands. In a very small binary protocol, we specify these FTP-like commands:

Let’s see what happens when we add two DOS servers into our six-worker Wallaroo cluster. Each worker is configured to replicate its I/O journal files to both DOS servers. Each DOS server uses its local file system and local disk(s) to store the I/O journals for all six Wallaroo workers. 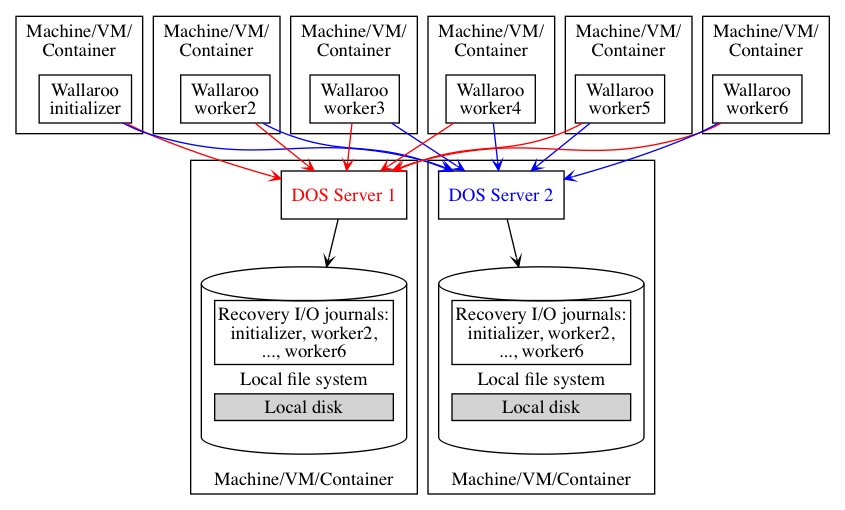 When a Wallaroo worker fails catastrophically, its local recovery files are lost. We must retrieve copies from a remote DOS server before we can restart the worker. The procedure for figuring out which DOS server is most “up to date” is described later in this article.

Our last example is another option: it uses EBS to provide redundant storage for a single DOS server instead of each of the six worker servers in Figure 2. The system in Figure 6 may be a more cost-effective option if “provisioned IOPS” costs for each EBS volume are added to the system. When the DOS server fails, the replacement procedure is similar to the failover scenario shown in Figure 3. 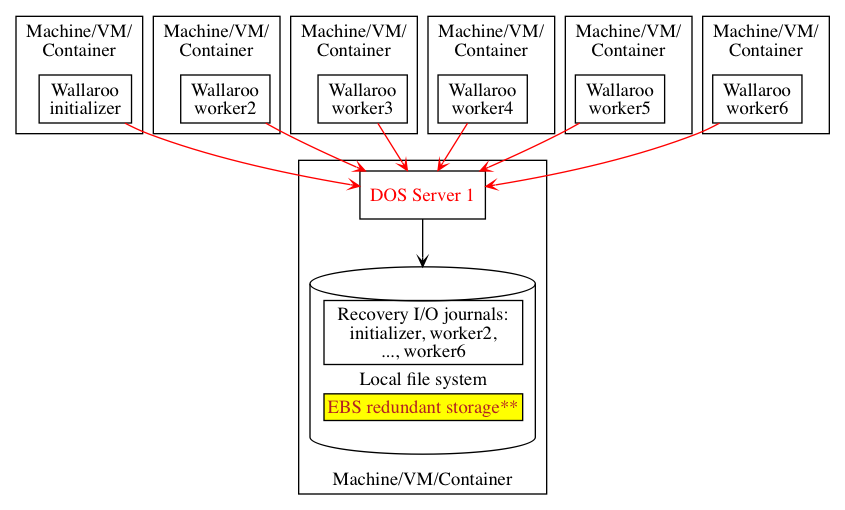 Implementation overview: client side (inside Wallaroo)

Each Wallaroo worker creates a number of recovery data files inside the --resilience-dir directory specified on the command line. A file listing of that directory looks like this:

A request has an operation tag number, an operation specifying byte, and two arrays of arguments: one of the Pony language’s type USize for integers and one of Pony’s type ByteSeq for strings/byte arrays. Depending on the operation byte op, the caller includes the appropriate number of elements in each respective array.

A view of serialized bytes returned by encode_request is:

If the binary contents of the my_app.journal file were translated into a human-readable form, they look something like this:

We can consider the file size of the I/O journal files as “logical time”. Given the set F of all files whose I/O ops are written in an I/O journal, then any single file f in the set F can be reconstructed at some logical time t by extracting all of f’s I/O events from the journal where the file offset of the I/O event is less than t.

For example, if we want to reconstruct (or “roll back”) the contents of the /w/my_app-worker3.connection-addresses file as it existed at the wall clock time of midnight on New Year’s Day 2018, the procedure is:

Any logical time construct mentioned in this article is applicable only to a single Wallaroo worker and is not valid for comparison with other Wallaroo workers.

In the case of data corruption inside of the log, we do have remedies available. The best remedy is to add robust checksums to all data written to a journal. Today, Wallaroo does not yet use checksums.

What’s next for data redundancy and Wallaroo?

Wallaroo version 0.5.4 (released on October 31, 2018) now has all of the raw components for data redundancy. To date, those components are only lightly tested for performance. The DOS client, written purely in Pony inside of Wallaroo, has not had any performance analysis performed yet.

The DOS server is written in Python. That seems an odd choice for a high-performance server, but early tests have shown that that the DOS server can write over 100 Mbytes/second of recovery data without significant latency. A later Wallaroo release may reimplement the DOS server in Pony for higher efficiency.

The long-term goal is to have a hands-free, turnkey system that will react to the failure of any Wallaroo component and restart it gracefully. We need to choose the environment for such a system: Kubernetes or Mesos? GCE or Azure or AWS? “On-prem” data centers? All of the above? While we wrestle with these choices, we’re confident that we are building on a solid foundation of data redundancy components.

Give it a try!

Get started with Wallaroo now!