This week we have a guest post written by Hanee’ Medhat

Hanee’ is a Big Data Engineer, with experience working with massive data in many industries, such as Telecommunications and Banking.

One of the primary places where the world is seeing an explosion of data growth is in social media. Wallaroo is a powerful and simple-to-use open-source data engine that is ideally suited for handling massive amounts of streaming data in real-time.

In this tutorial, I will use Wallaroo to analyze and extract insights from Twitter in real-time and present the results on a dashboard.

First, a little background on Wallaroo. Wallaroo is a relatively new open-source project that has been getting a lot of attention recently. Wallaroo Labs, the company behind the project, has shared a good deal of information about their approach and technology. You may have seen some of their recent blog articles on Hacker News.

You can find more information about Wallaroo by visiting this site.

Wallaroo allows developers to write code in native Python and, unlike other streaming projects, doesn’t require using Java or the JVM. I was intrigued by their approach and wanted to see how easy it would be to use Wallaroo to do some analysis on Twitter data.

This post shows a real use case on a massive online data stream, using Wallaroo’s Python API. We will show how easy it is to transform data streams with a small amount of code.

We will create an application that reads a real data stream from Twitter, extracts hashtags, and counts them to identify the top trending hashtags on Twitter. You can create the needed files on your own or follow along by checking out the Wallaroo Blog Examples GitHub repository and navigating to the twitter-trending-hashtags example directory.

Before we get started, you should make sure you have Wallaroo installed. You can find detailed instructions here. Everything has been implemented in the current version of Wallaroo (0.2.2). The full code can be found on GitHub. If you have any technical questions that this post didn’t answer, or if you have any suggestions, please get in touch at hello@WallarooLabs.com, via our mailing list or our IRC channel.

The Twitter Trending Hashtags application depends on the pandas, requests_oauthlib, and flask packages. These can be installed with the following command:

In order to get real-time tweets, you need to register on Twitter Apps by clicking on “Create new app”, and filling in the form under “Create your twitter app”. 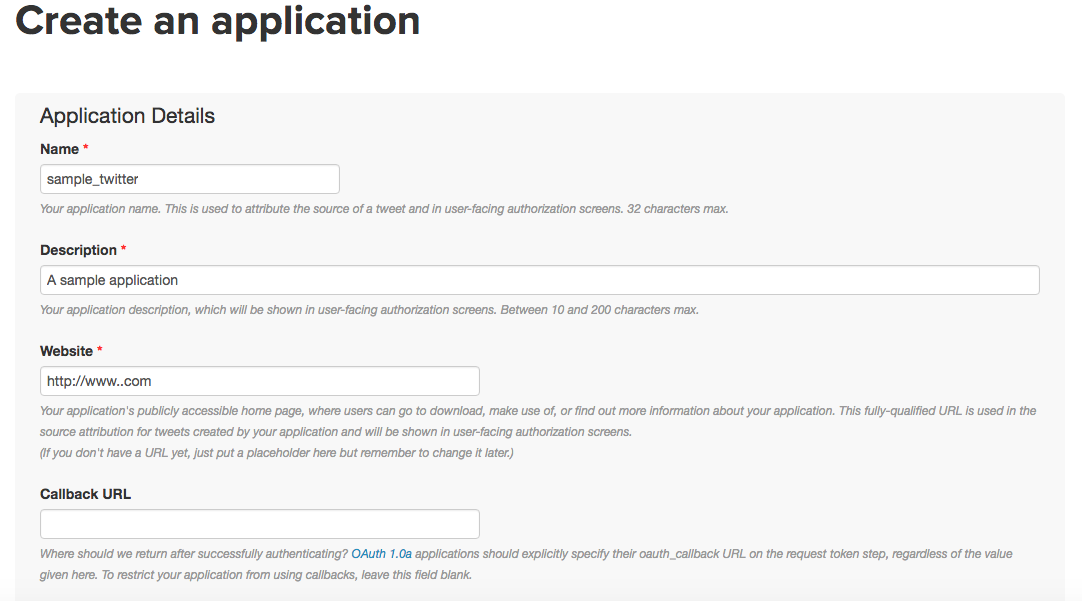 Let’s start by creating a client that connects to the Twitter API in order to grab the tweets and send them to Wallaroo.

twitter_client.py connects to Wallaroo using a TCP connection, calls the Twitter Streaming API to get the tweets in real-time, and forwards them to Wallaroo in order to be processed.

We connect to our Wallaroo application via a socket on ('localhost', 8002), then call get_tweets(), which initiates the connection to Twitter and forwards the tweets to Wallaroo, with the help of send_tweets_to_wallaroo(http_resp, tcp_connection).

Note that in send_tweets_to_wallaroo(http_resp, tcp_connection) we compute payload_length for each tweet and format it as a 5-digit string (e.g. '00005'), which is sent along with the tweet.

Now we can build the Wallaroo application that identifies the trending hashtags on the real-time stream.

The Wallaroo application logic is self-contained in twitter_wallaroo_app.py. We start by importing all the needed libraries.

The Decoder will translate the raw messages from the network connection and feed the resulting messages to the computations. Create a class called Decoder that implements the following three methods.

Now let’s define the computation class which will be used in the data processing logic. We will be applying this on the tweets received from the Decoder in order to extract all the Hashtags.

Our computation is called HashtagFinder, and like all computations, it must implement the name method and either compute or compute_multi

In this case, we are splitting each tweet into words first, then filtering only for words that begin with #, and passing the hashtags along to the next step.

Create The State and StateBuilder

This is a crucial step. We want to count how many times each hashtag was mentioned, and to do so we need to track this information in a stateful computation. We do this via State and StateBuilder classes.

We created the State class HashtagCounts, which contains a pandas dataframe that holds all aggregated hashtag counts, and is updated at each event.

This State class has the following three methods:

We also need a StateBuilder class called HashtagsStateBuilder that will be used to create State objects from within Wallaroo.

Next is the StateComputation class that updates the State object. This is similar to a regular Computation, but the compute method has an additional state argument, which holds the state object.

We can now define the last component of our application: the Encoder class. Here we transform the data to an array of all hashtags and an array of their counts, to be sent through the network to the front end application.

We now need to create the application topology from the module’s application_setup method.

We create an ApplicationBuilder with the name Trending Hashtags, and added the following components:

We’ll now create an adaptor that will collect the output from our Wallaroo application and send it to the RESTful front-end application. The code for this part is in socket_receiver.py.

The code is very simple, it connects to the TCP output of Wallaroo and looks for our pre-determined message separator (;;), and sends each message to the RESTful web service shown in the next step.

To be able to view the results of our application, we’ll create a simple dashboard that we will update in real-time using Wallaroo’s output. We’ll build it using Python, Flask and Charts.js

First let’s create a Python project with the below structure, and download and add the Chart.js file into the static directory.

Then, in app.py file, we’ll create a function called update_dashboard that can be called (by socket_receiver.py) through this URL: http://localhost:5001/updateDashboard

refresh_dashboard is created for periodic Ajax requests that return the new updated hashtags and counts arrays as JSON.

Now let’s create a simple chart in index.html to display the hashtags data and update them in real-time.

In the body tag, we have to create a canvas and give it an ID in order to reference it while displaying the chart using JavaScript in the next step.

Now let’s construct the chart using the JavaScript code below. First we get the canvas element. Then we create a new chart object, and pass it the canvas and data.

The last part is the function that repeats an Ajax request every second to /refreshDashboard, which returns the updated data for the chart.

Now that we have built all the components, from grabbing the data all the way to representing it on a dashboard, the only remaining step is to run everything:

you’ll see the dashboard being updated in real-time.

If you’ve run into trouble setting up the application and do not feel comfortable debugging the issue, we suggest using virtualenv to create an isolated Python environment. Here’s a good guide to help you get virtualenv setup if you have not done so already.

In this post, we’ve learned how to do simple online data processing on live Twitter data using Wallaroo, and visualizing the results through a simple RESTful Web service.

Even in this simple example, we can see how Wallaroo is able to transform and process a large data stream in real-time, with very little boilerplate code.

If you’re interested in learning more about Wallaroo, take a look at the the Wallaroo documentation and some of the examples that we’ve built. Also, check out our community page to sign up for our mailing list or join our IRC channel to ask any question you may have.