We handle the hard infrastructure problems so you don’t have to.

Welcome to the Wallaroo Labs Engineering blog. I’m writing today to introduce you to Wallaroo, the product we’ve been working on for a little over a year now. Wallaroo is a framework for writing event-by-event distributed data processing applications. We’ve designed it to handle demanding high-throughput, low-latency tasks where accuracy of results is key. If you are familiar with the “big data” landscape, Wallaroo falls into the “streaming data” category along with tools like Storm, Heron, and Samza.

When we set out to build Wallaroo, we had a few goals in mind. We wanted to improve the state of the art for streaming data processing by providing better per-worker throughput, dramatically lower latencies, simpler state management, and an easier operational experience. In this post, I’m going to touch on some of these points but not all of them. Over the course of the coming weeks, we will have a number of more technical in-depth posts on various aspects of Wallaroo and how we built it. Today, I’m here to set the stage for those future posts and give you an idea of what we are building. To that end, this post will:

Hopefully, by the time you’ve reached the end, we’ve gotten your interest, and you’ll want to join our community.

Let’s start talking about what Wallaroo is by way of an example. Our primary demo application is one called “Market Spread.” It’s based on a proof-of-concept we did for a large bank that was looking at ways to modernize their infrastructure. Market Spread is an application designed to run alongside a trading system. Its goal is to monitor market data for irregularities around different symbols and potentially withdraw some trades that have been sent to market should certain anomalies occur.

When we break the application down into its key components we get: 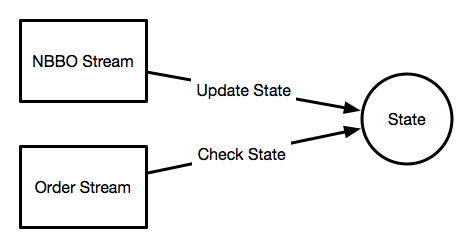 For the proof of concept, our client was looking to handle hundreds of thousands of messages a second with median latencies measured in microseconds. Further, they needed flat, predictable tail latencies that were measured in single-digit milliseconds. While the proof of concept was only run on a single machine, the goal was to have an application that would be able to respond to ever-increasing rates of data and seamlessly scale to run on multiple machines while handling millions of messages a second.

Distributed data processing applications are hard. We know, over the course of our careers, we’ve been involved in building a lot of them. Here’s a quick checklist of things we’d need to worry about for an application like Market Spread if we were to start from scratch:

That’s a lot to tackle and a lot of code to introduce bugs in. Wallaroo is, in part, an answer to that problem. It creates a robust platform that handles sharding and partitioning data across many machines. By leveraging Wallaroo, you can build demanding high-performance applications like Market Spread without having to worry about replaying messages when failures occur or deduplicating data on message replay. At-least-once message processing and idempotence come as a core part of the platform. We focus on the hard infrastructure problems, so you don’t have to. By building Market Spread using Wallaroo, the checklist becomes:

In a future post, we’ll discuss some of the design principles behind Wallaroo and how we’ve architected with those goals in mind. But for now let’s dive into the core Wallaroo abstractions.

How does one go about building a Wallaroo application? Via our developer framework and its APIs. The core abstractions from our API that I want to focus on today are:

You can combine computations together using another abstraction we provide: Pipeline. A pipeline allows you to say, for example, that the output from computation A will be processed by computation B. A pipeline begins with a Source step, which is responsible for receiving and decoding incoming external messages. Likewise, the pipeline may end at a Sink, if it has anything to output, which encodes data and sends it to an external receiver. In this way, you can take individual computations and start turning them into applications that take in data from various external sources and ultimately produce outputs that are sent to external systems via sinks.

Given these abstractions, what does our Market Spread application look like?

You can see we end up with two pipelines, one for our NBBO Feed and another for the Order Feed, each with its own corresponding source. We have a single type of state that we are storing (NBBO State by symbol), two stateful computations–one to Update state, another to Check it–and finally a Sink that we send any output to.

Performance is, in the end, highly dependent on the type of data, the computations being performed, etc. A future blog post will dive into performance in much more detail. Until then, I want to give you a quick idea of what the performance of a Wallaroo application can look like.

Let’s talk about the aforementioned Market Spread application and some recent performance numbers we’ve gotten with it. First, though, let’s highlight some key points:

Even with the simple application caveats that we laid out, we think that is some pretty impressive performance. Performance that we are committed to maintaining as we continue to add functionality to Wallaroo.

I mentioned earlier that our goal is to “provide correct results quickly.” The “correct” part of that statement is the most important part. Processing millions of events a second is only great if the results are accurate. We guarantee accurate results, even in the face of failure, by providing integrated managed state and effectively-once processing.

What do we mean when we say that Wallaroo provides “effectively-once processing”? In the face of failure, when messages have to be replayed to ensure that no data is lost, we won’t process a message more than once. Note that this is very different from saying a message will only be delivered once. If you are a bit lost, don’t worry. Hopefully, this example will help.

What we want to do is ensure that each message has been delivered at least once while also ensuring that it is processed only once. In distributed system lingo this is “at-least-once message delivery” + “idempotence”. By combining the two, we can guarantee that results in Wallaroo are correct even in the face of failures.